This Is The Legacy Of The Nazis. The Real Nazis...

On the morning of April 29, 1945, my father, US Army Sgt. Joe C. Sacco, and his battalion helped liberate the notorious Nazi concentration camp at Dachau, Germany.

As the son of a liberator, what I present here is not a political statement, but rather an American one. I have never been nor do I have plans to become a member of the mindless crowd that willingly hands over its intellect to the groupthink of a political party.
In order for the following to make sense, one must perform the difficult task of suspending his or her political herd mentality, if only for a moment.
To those who now carelessly and, in truth, ignorantly portray the great men and women who serve our nation in their roles as ICE agents, border patrol agents, police officers, and the like as “Nazis” who are “marching kids off to the showers,” you deserve nothing but the contempt of our citizenry.
To those on the increasingly-unpopular network and cable news programs who recklessly accuse fellow Americans of being Nazis, here’s a one-sentence summary; the real Nazis ripped innocent people from their homes, put them in horrific concentration camps, and murdered them by the millions.
Those imprisoned were not people who had snuck into Germany to take advantage of government handout programs. They were, instead, legal citizens of Germany, Poland, Austria, Italy, and surrounding countries who, oftentimes, wanted to escape Europe altogether so as not to be rounded up and killed.
Their possessions were confiscated and they were transported to the camps, where they were systematically murdered, all for the crime of being Jews or other undesirables. They were starved, they were beaten, they were stabbed, they were shot, they were hung, they were used in shockingly inhumane medical experiments, and they were decapitated. The teenagers were even used as target practice. And then their bodies were cremated so as to make room for more victims.
To those who breathlessly - and mindlessly - say, “But separating children from their illegal immigrant parents is how it all started,” you are wrong. As usual.
It started when a group of self-proclaimed elites began accusing those who disagreed with them of being evil … just as you now do on a daily basis. So sober up and knock it off.
Such ill-informed rhetoric is an open call to do violence against those with whom one may disagree and who, therefore, must be evil.
There is a deep and foreboding chasm between the actual evil of the Holocaust and those who attempt to manufacture it for the purpose of political gain. From deep within that gorge will forever echo the cries of millions who were murdered by people who had positioned themselves as morally superior.
I know that many in the media, while pointing to photographs from circa 2014, hysterically accuse current government officials (including ICE and border patrol agents, members of Congress, and even our President) as heartless and evil. These same media members made no mention of the dilemma back when the photos were actually taken.
Such a misrepresentation is as stupid and dangerous as having a doctor look at someone else’s old X-Rays and then prescribing a course of treatment for you.
But perhaps most appalling is the willingness with which many in the media accuse other Americans of being Nazis in order to serve some idiotic, convoluted political agenda. Such viciousness is not only monumentally insulting, it is a betrayal of both the victims and the liberators of the real Holocaust. In addition, it sends the younger generation the asinine message that the Holocaust might not have been such a big deal after all.
The Holocaust ended the minute the American soldiers, my father included, entered the camp. But Dachau’s liberators did not enter as Democrats or Republicans, liberals or conservatives. They were Americans first, foremost, and forever. As such, they were victorious over real - not imagined - evil.
Here’s a quick recap:
ICE Agents = Not Nazis
Border Patrol Agents = Not Nazis
Police Officers = Not Nazis
Members of US Military = Not Nazis
Members of Congress = Not Nazis
Democrats = Not Nazis
Republicans = Not Nazis
Libertarians = Not Nazis
Independents = Not Nazis
Donald Trump = Not a Nazi
Mike Pence = Not a Nazi

First Family = Not Nazis
Barack Obama = Not a Nazi
Hillary Clinton = Not a Nazi
American politicians in general = Lots of hidden agendas that are almost never in your best interest, but not Nazis
People who may disagree with you = Not Nazis
So now, on behalf of the millions murdered by the real Nazis and on behalf of my father and his buddies who were among those who put an end to the truly evil atrocities of the Third Reich, I share with you one singular, horrifying image of what an actual concentration camp looked like. 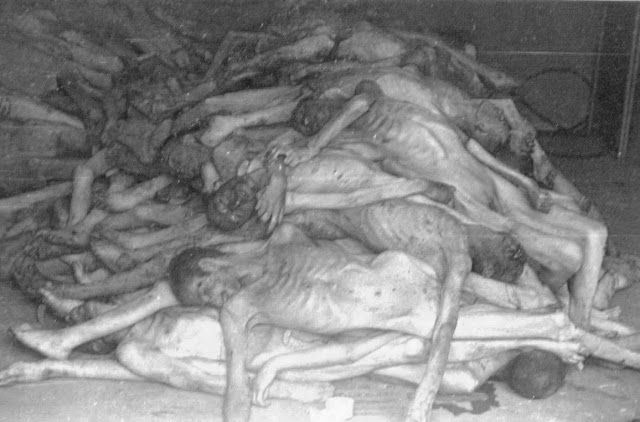 The photos in my book are just of few of the many taken by my father on the day of Dachau’s liberation. They provide only a glimpse of the evil he and his fellow soldiers found when they entered the camp.
Among the scenes he described was an especially poignant one in which he stared down into one of the railcars in which Jewish prisoners had been locked and starved. There, leaning against a corner, was a young lady nursing her infant son. Both mother and baby were dead. My father, who was 20 at the time, knew that no matter how long he lived, he would never see anything so profoundly tragic as this.
This is the legacy of the Nazis. The real Nazis.
Jack Sacco
Author of “Where the Birds Never Sing”
American
www.JackSacco.com
Posted by Gringo at 10:15 PM No comments: